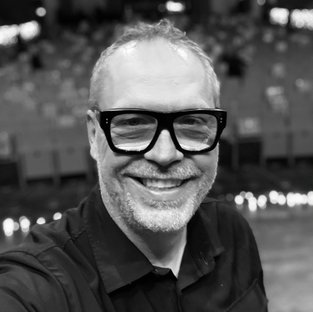 Anders has been in the music business for 25+ years and has senior experience in most aspects of the industry.

Anders' journey started in a record store on Funen, a number of years as a successful DJ and as a radio host on both P3 and The Voice. His first job in the industry was as a salesman at PolyGram, which quickly led to an A&R position working with artists such as Lis Sørensen, jazz legend Niels-Henning Ørsted Pedersen, and many others. This was followed by a couple of years as A&R at BMG for artists such as Søs Fenger, Caroline Henderson, and others.

The next shift was to Sony Music where Anders was head of A&R and head of the local department with releases from Kashmir, CV Jørgensen, Caroline Henderson, and many others from 2000-2004. The next stop for Anders was as music manager for the TV production company BLU including a season as a judge in the Danish version of Idols broadcast on TV3.

In 2005, Anders switched to publishing as a partner in Good Songs Publishing under The Music Business Organization. MBO was also the umbrella organization for the record companies Copenhagen Records, CMC, and later A:Larm. During that period, Anders was involved in developing the publishing scene in Denmark and was one of the first to create serious writing camps for artists such as Sanne Salomonsen and to a large extent for Melodigrandprix / Eurovision. A few highlights from the Good Songs period were the Eurovision victory in 2013 with the song "Only Teardrops" as well as big international hits like "Fascination" with Alphabeat.

In 2016, Anders founded ArtPeople Music Publishing together with industry veteran Jan Degner becoming part of People Group and laying the cornerstones of what later became The Arrangement, including work on the first season of the popular TV2 Christmas calendar Tinka. For the last 15+ years, Anders has been one of the country’s leading Music Supervisors when it comes to big TV shows with heavy musical content. The list is infinitely long but includes various royal events, X-Factor, De Største Øjeblikke on TV2, TV2 Christmas Show, and Zulu Awards - including the award-winning shows from 2019 and 2020.

With the founding of The Arrangement in 2019, Anders has found the perfect way to be in an ever-changing industry where he enjoys every single day of being surrounded by immense talent and great colleagues.